The Wolf and the Iguana: A Love Story: Los Lobos’ Louie Perez recalls the band’s experiences at the Red Iguana. 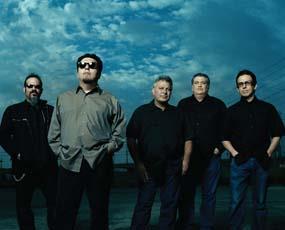 "Every Red Iguana patron has seen the jaunty cholo script on the restaurant’s Wall of Fame that reads "Los Lobos." Maybe you’re one such diner, and a fan of the band? If so, you might have zoned out over your food and imagined the band members, themselves high on the Iguana’s killer mole dishes (¡y cervezas, órale!), whipping out Sharpies and making their mark, which has become the cool nucleus of the green Red Iguana wall.

It must be analogous to Zorro carving his trademark Z, a monument to some mythic moment in time. Alas, Los Lobos aren’t swordsmen or banditos or even mariachis. In fact, the way Louie Perez tells it, they were just another band from East Los Angeles, rolling through town when their hunger led them to the restaurant that has become Utah’s home for "Killer Mexican Food."

"Oh yeah!" says Perez while noting that the Santa Ana winds have cleared the skies to reveal the mountains near his California home. "We’ve got a lot of history [at the Red Iguana]."
Read Full Article HERE
Tags:  Red Iguana City Weekly A Love Story Los Lobos